With the independent spirit to see the ordinary from a different perspective,
VISANG is creating a new global educational culture

- Named in 2 categories at the UK's Bett Awards, the world's most prestigious honors in the ‘education technology’ industry

SEOUL, South Korea, Feb. 3, 2021 / -- Visang Education (KOSPI 100220), a global company led by CEO Yang Tae-Hoe towards the promotion of global education culture, announced that it had been nominated as a finalist for the Bett Awards at the 2021 BettFest – the world's largest Edutech event – held online this past January 20th – 22nd.

The Bett Show (formerly known as the British Educational Training and Technology Show) is a global series of education fairs organized annually in London since 1985 under the auspices of BESA (British Educational Suppliers Association).

Visang submitted its products to compete in the 2021 Bett Awards, which this year included 22 unique categories. Of these, “Covid-19 Response Champions – International Initiatives” saw Visang’s online pre-school program, Nuri Plus, named a finalist, while the self-directed English learning program for primary and middle school students, englisheye, was shortlisted for the “International Digital Educational Resource” award.

Nuri Plus is a service developed to support early childhood education institutes by facilitating video education programs on a daily schedule for young learners ages 3 – 5. Moreover, Visang is also the only Asian company that made finalist in the 2021 Bett Awards for the said category.

englisheye features independent English lessons focused equally on listening, speaking and writing through over 1,400 videos directly filmed and produced abroad. The program received favorable reviews at the Bett Awards as a remarkable educative solution and for its high-quality content and also made to be named a finalist among all other international digital resources for Education. Visang has previously been issued an export certification for englisheye by local South Korean authorities. 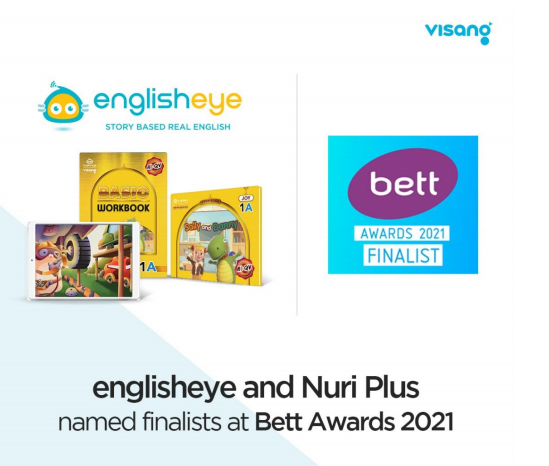